Within the last month we have received the first reports of scattered light rains in the region, and in the last few days a few heavy downpours have been also reported. Across the region everyone will be hoping that we are on track for good rains this year. 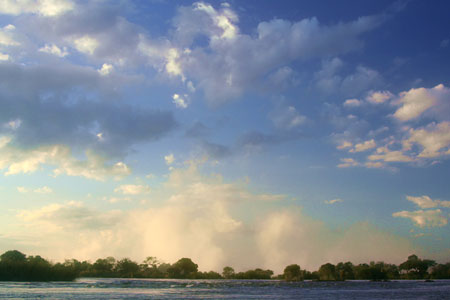 Photo: Early morning skyscape and spray from the Falls Courtesy of Peter Roberts

The onset of the rainy season marks the end of the traditional safari season, however more and more travellers are choosing to visit Africa outside of the usual dry season safari, when game is more likely to be concentrated near water and easier to see. Whilst it is true that game such as elephant, buffalo, zebra and assorted antelope species do disperse with the arrival of the rains and first flush of new grazing and browse, and with them the predators, they can still often be found by the patient observer, and the transformation of the dry, dusty plains into lush verdant grasslands and woodlands is truly spectacular and accompanied by its own wealth of wildlife. 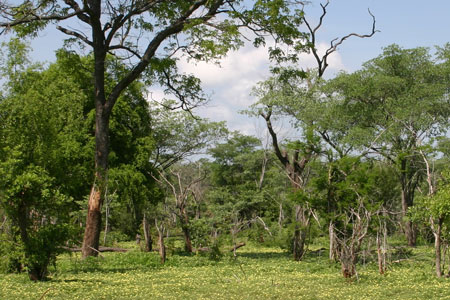 For the naturalist the rainy season offers amazing birdlife, reptiles, amphibians, insects, a whole wealth of flowers and other flora, and for the photographer spectacular thunder storms, torrential rains, dramatic skyscapes and incredible sunsets. If you are travelling in the region at this time of year a waterproof is an essential item, as downpours can be a daily late afternoon event.

The river is at its lowest, before being replenished by the oncoming rains, and the Falls at their driest, allowing the visitor to study the rock walls of the main gorge, worn smooth by the erosion of the water, and to contemplate the power of this natural wonder.

The eastern Cataract in Zambia is particularly dry at this time of year and visitors to that side only are invariably quite disappointed, however there is still, as always, a good amount of water flowing over the Zimbabwe end of the Falls, with the Devil's Cataract and Main Falls carrying a good volume of water all year round. 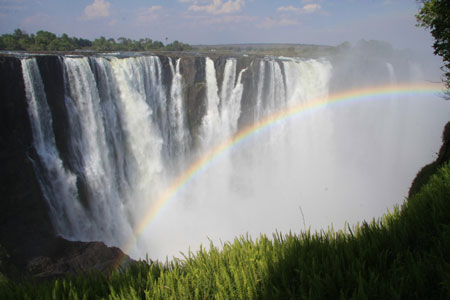 This is a good time of year to face the challenge of rafting the rapids of the Zambezi, or indeed undertake any of the activities around town.

That's all from us for now - enjoy the rest of the newsletter!

Back to Back Issues Page